“Even during my architecture studies, the figure of philip johnson was important to part of my generation of students. a man who early on made contact with the protagonists of bauhaus thought, of 20th century modernism – such as architects walter gropius and mies van der rohe – offered his services and contacts, and even became an important sorcerer’s apprentice to their careers after their emigration to the united states, and then nevertheless, in the late 1950s, increasingly distanced himself from the kantian categorical imperative of the new german building – certainly also as a reaction to the aversion of the great frank lloyd wright to the danger of a too great influence of these ‘emigrés’ on the original north american architecture of his time.
After his seagram cooperation with mies and the MoMA invention of the term ‘modern architecture’, johnson shifted more and more to his own career, i.e. his development as an architect. in the course of this process over the following decades, he became one of the first u.s. architects, even more one of the first ‘pop stars’ of this genre, always good for twists and contradictory statements and buildings: in the AT&T building in NYC, a flying golden sculpture of a mythological-looking young man was incorporated at street level, possibly as a citation to the iconic golden figure at rockefeller plaza – the name of the figure ‘the golden boy’ in AT&T was soon applied to johnson himself – perhaps as a reference to his ‘midas legend’ as one of the typical success planners of his time in the USA. Soon johnson began to build for his own purposes, as a pop star not only not shying away from the quote, but on the contrary seeking it. so on a large plot of land in connecticut first the ‘glass house’, a building quotation on mies van der rohe’s ‘farnsworth house’, and then a whole series of other buildings and constructed objects were built into the park there – one of them is the so-called ‘pavilion in the pond’ – that is a roofed, walkable building sculpture in a pond – walkable is too much to say, the clear inner height of the arches allows only very stooped entry and then but nice sitting and resting on pads and tatami mats. The dimensional leap alone, i.e. the reduction below the usual scale, caused scorn and disdain among the contemporary functionalists, whose morals of scale suddenly seemed to have been turned upside down … the current fashion of postmodernism thus had a new leading figure, and one who had previously been on first-name terms even with the bauhaus masters.

I chose this photograph of philip johnson in his ‘pavilion in the pond’ for LIVING IN A BOX, because both the baroque (palladio) and the modern (mies van der rohe) idea of the pervasion of the interior-exterior world (BOX) by architecture was made visible here, and johnson is visibly in a good mood and feeling well while having his snack. It goes without saying that he had to be gold-plated.” Carl Auböck IV. / September, 2021

Carl Auböck IV. (Vienna/Austria) is an architect. In succession to Carl Auböck II. (painter and product designer) and Carl Auböck III. (architect and industrial designer), he is the fourth generation to run the “Carl Auböck Wien” workshop, which Karl Heinrich Auböck founded as a bronzeware company shortly after the turn of the 20th century.

Dear Carl, I always could convince you of cordially welcoming me in your workshop at 7th district. Our 4th encounter opens a new dimension.
Yours Dominik 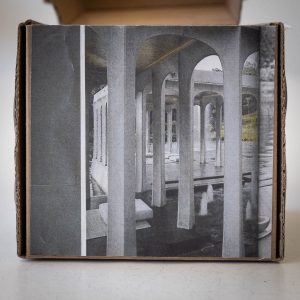 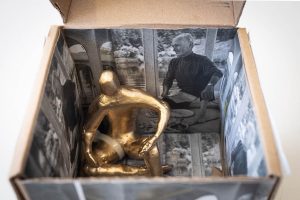 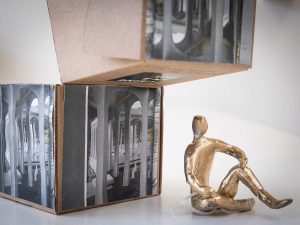 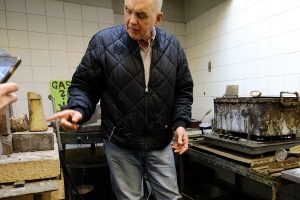 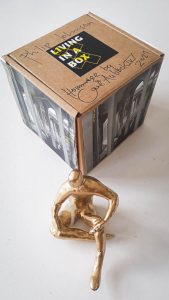